This is the seventh of ten posts highlighting my favorite assignments from the past ten years. As a way of celebrating the first decade of Mud Productions I'm offering 10 special offers this month. Check em out, and play a part in the next ten years. Thanks for tuning in!

Like most of my jobs this one is a story of one thing leading to another. If you've been paying attention lately you will recognize a few names mentioned on this crazy rabbit trail. It goes something like this.

Anyway, I got an email from United Way, and I was instantly excited when I heard the details. The shoot featured NFL players and the photos would be used on billboards across the country. Like most of my other memorable assignments this one left me feeling excited and nervous.

My introduction to this campaign was something of a baptism by fire. There were about 10 NFL athletes in town, and I was given less than 30 minutes to shoot each of them. No chance for a re-shoot if something wasn’t working. Fortunately I found my stride early on and we rocked it out without a hitch. They even liked me enough to call me back a couple times.

Photo by Stephen Elliot in association with MudProductions.com

On one occasion I got a semi-frantic call around 2:00 o’clock saying that the final athlete to be photographed was available at 4:00 and they needed to send him to my studio. I promptly called my wife (who is conveniently a makeup artist) and the two of us got to work together from our home studio on a national campaign. Even though it was rushed we got some great photos and it was my favorite shoot that year, hands down. 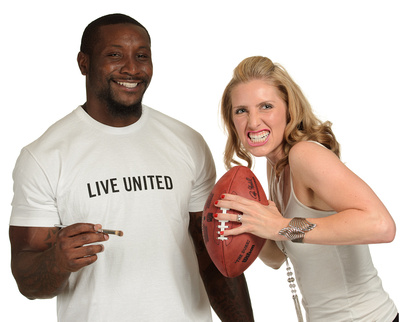 The Live United campaign has been ongoing for a few years, so there were very specific guidelines to steer me in the right direction. I also had their marketing team, a photo assistant, makeup artist, and logistics coordinator to make sure everything came together as planned. It's amazing how much different (read: better) a shoot goes when I don't have to do everything myself. Good photos are rarely the result of one dude with a camera.

Technically speaking the best photos I got were the ones I shot in my home studio. Previously I had rented $400 worth of additional equipment to shoot the players, but when they sent Navarro to my studio there simply wasn't time to pickup any additional gear. Fortunately my studio was designed to give me precise control over my lights (thanks largely to flat gray paint on the walls), so I was able to get a lot of mileage from just three small speedlights.