A Decade of Memories: You Had Me at Helicopter

This is the second of ten posts highlighting my favorite assignments from the past ten years. Each post includes lessons learned and a special offer to celebrate Mud Productions' 10th anniversary. Thanks for dropping in!

Every so often I get an email that says something like, "Would you be willing to take photos from a helicopter?" and I'll usually respond in a very professional manner: "Are you kidding me?! I'd LOVE to!! I think I just wet my pants a little...." And when I say this happens every so often I mean it's happened to me once. ...so far. ;)

I had worked with Gaylord National a few times already, but I was still an amateur photographer at best. When they offered me the opportunity to shoot aerial photos of their property I was honored and ecstatic to say the least, not to mention very nervous. 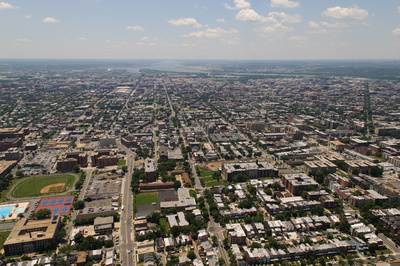 After we circled the property three or four times the pilot said to me, "Did you get what you need?" I smiled and said, "I'm good," while flashing a thumbs up in his direction. I thought we would head straight back to the helipad, but what happened next was much more awesome. "Roger that," said the pilot, "We're gonna take the scenic route back." Apparently they were doing a sightseeing favor for the other passenger on board, and I had the best seat in the house.

We flew up the Potamac River, straight over the Lincoln Memorial, swung around the National Cathedral, and then hovered over RFK Stadium on our way back to the helipad in Anacostia. It was an incredible, once in a lifetime experience! To this day it's one of the most fun shoots I have ever done. I wrote a whole blog post back then about the things I learned from this shoot. Most of it is fairly technical, so if you're into that you can find it here.

Honestly, the pictures I got were not amazing, but the experience was unforgettable. That's my favorite thing about being a photographer: experiencing life with other people and occasionally getting paid for it. It's a pretty sweet gig. On a different note, today's deal is aimed at aspiring photographers. By that I mean anyone who:

For the rest of the month I'm offering private photography lessons for $50 a pop.* You can sign up for yourself or give it to someone else as a gift. Voucher can be purchased from the Square Market. Use the promo code: HIGHFIVE during checkout.

*Lessons can take place any time in 2014, but they must be purchased by midnight on Feb 28th. Travel expenses apply for lessons outside the NYC metro area.